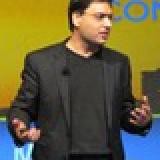 Nitin Mangtani is Founder & CEO of PredictSpring, an innovative mobile platform that powers Omni-Channel experiences for brands and retailers. Nitin is a former Googler and visionary behind Google Shopping product. Nitin led the Google Shopping team for 7+ years and helped scale the platform to hundreds of thousands of retailers worldwide. Prior to joining Google, Nitin was a founding member of data infrastructure group at BEA from 2001-2006. BEA was the leader in application platform market and was later acquired by Oracle for $8.5 billion, one of the biggest acquisitions in enterprise platform space.

Check out the incredible speaker line-up to see who will be joining Nitin.

*Processing your payment may take a moment. Please click submit payment only once, and do not refresh this page. Doing so may result in your credit card being charged more than once.

We use cookies and similar technologies to recognize your visits and preferences, as well as to measure the effectiveness of campaigns and analyze traffic.
To learn more about cookies, including how to disable them, view our Cookie Policy